I heard that the interest rates are really low, and that’s why lots of houses (in the Netherlands) are being sold so quickly! A friend and his girlfriend also bought a house recently and I made a card for them. But before I get into the card, I’d like to thank those that have commented (and also for the likes on Facebook) on my last post/card I made that was for Chinese New Year. 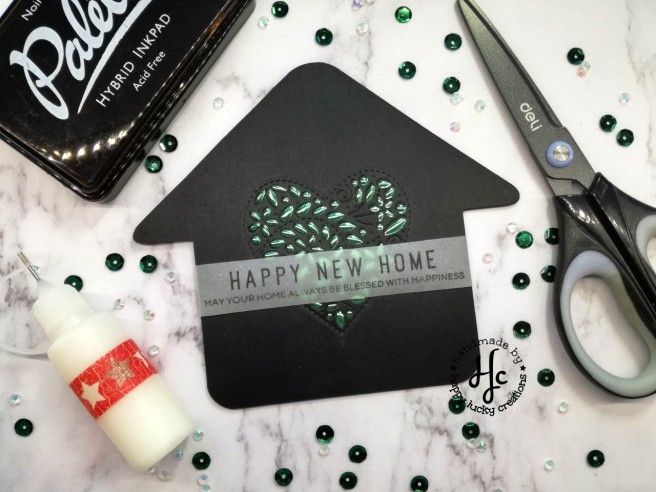 So, what do I have here? A small house with a filigree heart! The card took a few hours to make because I  was thinking up the “new” technique which I’ll explain later and also designed the card on my computer. So I think this may be an advanced card, but I’ll tell you how I made this card and perhaps it won’t be hard afterwards.

I began by designing the card on Cricut Design Space. I had to think about how the card can open and close and finally decided on the design pictured. It is a double house without the roof bit that sticks out and a score line down the middle. Next to it are two houses. I cut all three pieces out from black card stock.

Tip! It is nice to have a cutting machine (plotter) like the Cricut or Silhouette, but it is not mandatory. You can always draw and design something on paper and cut it out.

I folded the double house piece on the middle and set it aside. On one of the house pieces, I die cut it with a filigree heart die and glued a piece of metallic green (transfer) foil on the second house.

Now it’s time to let you know the trick/technique that I thought of for this card. In the picture above, the left side is a the filigree house-piece on top of a piece of flat foil. The right side shows the foil with a bubbled effect. How did I do that? I will tell you!

This is a technique I thought on my own, but it’s not completely original. What I really wanted to do was have the same effect as the cards in a video by Jennifer McGuire, “Foil Die Cutting Technique”, which where she used transfer gel, foil, and a laminator. I don’t own any transfer gel, so I needed another method. That was how I thought of embossing the piece with the foil with the same die.

First I put the two houses together with washi tape, then I put the die on the same spot as where I die cut earlier. Make sure the die is exactly on the same spot, otherwise you might get an offset, which is what happened to me. (If you look at the photos really well, you’ll see it is slightly offset.) Then I made a sandwich for my Cuttlebug: A-plate, die and house (cutting side up), rubber embossing mat, two pieces of cereal carton, and two B-plates. Different mashing have different sandwiches/sandwiches, so if you really want to try this technique, use whatever settings you would use for embossing with a die.

So, there you have it! The rest is just putting everything together with glue and tape. I also stamped the sentiment on vellum, cutting it to size, folded the vellum strip around the back of the house and tapes it down. I then glued the house onto the folded doucle house piece that I had set aside easlier.

Tip! Stamping on vellum is difficult because vellum is semi-porous. The best ink to use is a hybrid ink. I used Palette Noir Black, but I bought this stamp pad in america and it’s not available in the Netherlands. Anyway, I think other hybrid inks will work almost he same, like the hybrid ink from Nuvo. Another option is Stazon/Stazon Pigment or a dye ink.

Thanks for reading. I how I inspired you with my foil dry embossing technique to give your work more dimensions!

Until next time, Create Happiness Today!